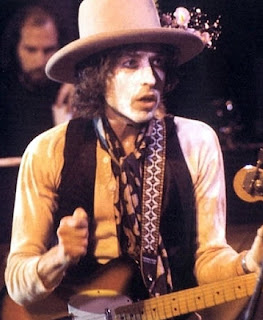 It was an unseasonably warm Thursday in late October of 1975. It was Mike Porco's 61st birthday. It had been sixteen years since he first invited acoustic music performers into his Italian restaurant. They came to Gerde's in droves as the 1960s began and New York's first open mike night was born out of necessity. The term "talent night" was voted down so Greenwich Village's first Folk-only cabaret (read: paying room) borrowed a term from Pete Seeger and dubbed its singer/songwriter amateur night the Hootenanny. One of those amateurs in particular was set to return to Folk City to wish Mike a Happy Birthday in person.

In 1961, a young man from the Midwest tried to work his way onto the stage at Folk City. Being so young and looking even younger, Mike told the boy to return the following Monday with proof of age before he could allow him to play. In February of 1961, Bobby Dylan, two weeks removed from his Minnesota departure, played his first Hoot and made himself known to the Gerde's crowd.

Gerde's, meanwhile, became known for showcasing only established and up-and-coming recording artists for their weekly bookings. Back then, a union booking consisted of 12 sets over 5 nights. The Monday night Hoots were taken very seriously by the unknown performers but for the headliners, this gig was their bread and butter. Touring stars like Ed McCurdy, Liam Clancy and Tommy Makem, Brother John Sellers, Carolyn Hester, Sandy Bull, Cisco Houston, Sonny Terry and Brownie McGhee, The Tarriers, John Lee Hooker, The Greenbriar Boys and Rev. Gary Davis were among Gerde's first year's performers. There was no shortage of outstanding talent and entertainment in the Village back then and it only begat more quality singer-songwriters to sign up for the Hoots.

Throughout the years, thousands of music lovers witnessed music history written on Gerde's stage. By 1975, thousands more musicians had come to New York City to make their own contribution to the Greenwich Village Folk Music Scene. Arguably, none were more successful, more influential or more monumental in reviving the world's interest in Folk than Bob Dylan. During the first decade and a half of his career, he helped define and then RE-define the Folk Rock genre itself.

Even so, Bob Dylan had had ups and downs on his career path. The 1966 motorcycle accident, the retreat from touring and not-so-well received releases of Planet Waves and Self Portrait had some believing that his best days were behind him. With the '75 release of "Blood on the Tracks," he had re-established his place as the premier songwriter of his generation. The follow up album, "Desire," had silenced critics further and this period has been looked back upon as one of his most productive and best sounding eras of his life. He was ripe for a tour.

Unbenownst to Mike Porco, his place was chosen as the first venue to see and hear the spectacle that became known as the Rolling Thunder Revue.

Larry "Ratso" Sloman has graced us with the most intimate account of the tour in his book "On The Road With Bob Dylan." From the final studio sessions for the Desire album to the Night of The Hurricane, Ratso takes us backstage, onstage and into the semi-private moments surrounding the music legend making history. How the Rolling Thunder Revue wound up at Folk City is told with spectacular detail.

In a nutshell, Dylan was recording in NYC. Word had travelled around the Village that Mike Porco was having a small birthday party organized for him by relative newcomer Jack Hardy and other club regulars. Dylan, Jacques Levy, Roger McGuinn and others were known to be socializing after hours at the White Horse Tavern and other back rooms at the time. Mention of Mike's birthday reached Bobby and the impulse to gather at Gerde's for an intimate party took hold. From there, it wasn't long before the rattle of Dylan's unannounced gig was passed on in tight circles around town.

Folk singer Rod MacDonald retold his story to me about how word got to him. He was waking from a late-day slumber that Thursday afternoon and haappened upon the Mayor of MacDougal Street, Dave Van Ronk. They shared a few blocks walking together when someone came up to Dave to tell him that old friend Bobby would be playing a "secret" engagement that night at Gerde's. Dave, less than thrilled to see Bob's entourage worshiping at his feet, let out a big sigh and said he was only going to pop in to wish Mike a Happy day but he wasn't sticking around. He turned to Rod, however, and said "You should go. You shouldn't miss it."

Rod was in good company. In the growing crowd were such luminaries as Bette Midler, David Blue, Phil Ochs and Allen Ginsberg. People were "hanging from the rafters" and, as Rod recalled, a strange vibe engulfed the club. It seemed that everyone knew that Dylan was in town but Mike. Earlier, a film and camera crew had assembled in the club telling Mike that it was all being set up for a TV special on the local public station, Channel 13. The lighting etc was actually a set up for the filming of "Renaldo and Clara." Several hours of the night were filmed there but only a few seconds were used in the movie. As it turned out, the last known footage of Phil Ochs was taken that night.

Jack Hardy and the duel act undercard played full sets that night even after Dylan had arrived. He was dropped off at the curb and as my father remembers, the sea of people split down the middle to allow Gerde's Own to sit right at the stage. No announcements were made for some time. Performers just got on the stage and took over where Hardy left off. The illustrious Rosie, the occasional MC, was plucked from the crowd to perform her duties quite unplanned. Eventually Dylan got up and was reunited on stage for the first time in 7 years with old flame, Joan Baez. A scant many pictures exist from that night but one photo shows them on the tiny stage at Folk City with Eric Andersen. The night ended in the wee hours with Buzzy Linhart and Bette Midler perfoming their hit, Friends.

Oh, by the way, a cake was presented to my Grandfather and happy birthday was sung by all of his friends and admirers. It was promptly dropped face down onto the floor of Folk City. Very apt indeed. (wink) What mattered most to him, as he was quoted as saying, was that they all had a chance to get together again. Such as the music business was in the mid-seventies, singers could no longer make a living in their own neighborhoods any more. Some had to be on the road constantly. Others were forced to get real jobs. And others, like Judy Collins or Paul Simon, were too large to play a 90 person room anymore. But, for the most part, whenever they had a chance, they'd stop in to see Mike and wish him well. Even Bobby Dylan, at the height of his career, this date all those years ago.
Posted by Porco at 10:57 AM