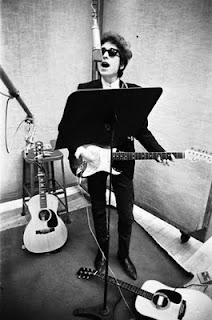 So I went to a couple of Dylan shows last month. The first being in my neck of the woods at the Mid Hudson Civic Center in Poughkeepsie on November 16th. Being that is was local, I bought 4 tix assuming it would be easy to find 3 others to attend with me. It was a no brainer to ask Edwin, an old family friend. Affectionately and more often called Bud, he knows more about Dylan than anyone I've ever met. Bud was eager to help me archive the footage from June 7 Porcofest and in the process, share several of the hundreds of bootlegs and rare discs capturing Dylan not only in his prime, but also as a budding artist. Amongst the gifts, he gave me a copy of the "Banjo Tape" allegedly recorded in Gerdes basement in the early sixties and another tape known as The Glover Tape recorded on a whim in 1962 on one of his first visits back to Minnesota after he had established himself in The Village.

It shouldn't be a surprise that Bud's youngest son is named Dylan.

Anyway, Bud brought John to the show and could have easily found another taker. But I wanted to offer my own ticket to someone. Well those someones didn't want to venture out late on a tuesday so, in a flash, I contacted the Anniversary Party's opening act Roland Mousaa. Roland knew Uncle Bobby way back when and has been credited with saving Dylan from being stabbed by Phil Ochs in a drunken haze.....but that's another tale....

"Yes! And I'll make a couple of calls to get us back stage," Roland wrote me in an email. "Bob will be pleased."

Well I hadn't thought he could pull it off but what the hell. I wasn't going to stop him. I had been making attempts myself by contacting Jeff Rosen's office personally asking for a moment of Dylan's time just to get the lowdown from the man himself about his relationship with Mike Porco. He's the only man alive that can tell me. But I didn't want to pester his office too often and upset the balance. I didn't want to cross the line and be seen as a stalker. I figured that since my name had become subject matter on inter-office emails I was nearly there. At least it didn't say Re: bob Porco, delusional fan....

Later found out what kind of following he had as evidenced by the legion of fans who join in on the never ending tour for a leg or two.

But now, Roland was on the case and doing his damndest to try and get us all connected. "I think Bob would want to meet you," he said. "He loved your Uncle John and your Grandfather." Roland had spoken to Bobby's California office more than Jeff Rosen's NYC office. I started the week thinking I had a .01% chance of meeting Dylan but with Roland hustling, I thought wishfully that it just might be 50/50 by Tuesday night.

Alas, no success was had in getting word to and from Dylan by the managerial route. So, while still in the audience and within a few rows of the band, I decided I would get closer to the stage for the encore and try to get within earshot of him while we were still in the same room.

Well after closing with Like a Rolling Stone, Bob assembles his band for a final bow and I take the opportunity to toss a folded copy of the Anniversary Reunion poster on stage with a cheeky note on back. (BBQ at my house!) That's my brush with fame....a folded piece of paper thrown on stage after the show. Whoop!

Roland and his wife Princess Wow aka Brenda were not wowed by Dylan's new loud sound. I, however, was in awe at how he still can hold the crowd in his hand without saying much. He played a lot of lead guitar that night and did a rendition of Ballad of a Thin Man that I can only describe as milk curdling. And to note, 20 year old girls are still inching closer to the stage to get a good glimpse of the man. Fact.

Well, after the harsh realization that no one gets in to see the wizard not no way not no how, I went with Bud and John to the lobby of the ajacent hotel for a nightcap. That's where I met Ross.

Ross was already there and must have heard us rehashing the versions of the night. He tells us that this show was his 27th of the year and he was driving to Binghamton for the next night's show, as well.

So of course, my plans on the 23rd were expanded to meet up with this wine exec from San Fran via Chicago and his band of gypsies who "would want to meet you, too."

This time I went with Vincent T Vok who purchased the round of beers that led to the idea of the reunion party in the first place. His eldest son also answers to the name Dylan. Go figure. "Good things always happen when we meet out," he says.

The Readers Digest version is: we met near Times Square. Walked to 56 and 11 and got my bag checked before going in. Had a personal favorite poland spring water tossed in the trash. Got frisked and had the rest of my kind stash also thrown in the dustbin to join my water. Caught up with Vok. Bob gave many a religious experience during Thunder on the Water. Met up with Ross, Darlene, Patrick, Charles, Sean and an Irish dandy of a man dressed impeccibly in a suit and tie working in his 75th show of the year with 2 more to go named Noel. We ate and drank and had a blast. I felt woozy in the morning and had forgiven the theft of goods at Terminal 5.

But I spoke to Lee Ronaldo of Sonic Youth in the hall leading to the bathroom as Working man Blues #2 played live. "Hey man. I'm sorry to stop you but I have to tell ya, you, Dylan and I have something in common."
"Oh yeah," with a puzzeld look
Yeah man. folk City! My grandfather owned it before Robbie."
Oh that's COOl!
Then I got the chance to tell him whatfucking Sonic Youth means to me. Then we talked about Izzy Young. Strange but true.

The awareness
The understanding

Realized I've not made a lot of new contacts at the pace of a year ago, but I've still been active within this new Community. I've gained access to this close knit group, have been welcomed in with no questions asked and have been able to gain my own perspective from the inside. Among some things I've learned is that that's how they ALL got here. Dylan, Porco, Bromberg, Traum, Havens, Hardy, Ungar...everyone. That's how it works. The music binds to a group of mankind and it's up to the group to expand and bring in others so future generations can perpetuate and self serve the living group.

Like rock and roll..... only the small town feel.

Like Mike Merenda said to me, "Its a small family but it's strong!"
Posted by Porco at 12:34 AM No comments: