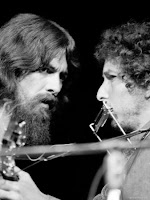 It's been a decade since my personal favorite Beatle has left us. The anniversary of his passing reminded me of a story my father, Bob Sr., passed on to me.

Long ago, long before there was a Nelson or Lucky Wilbury, there were two buddies named George and Bob. They had met in the early Sixties and had remained friends as their respective careers took shape in their own due course.

Bob Sr. looked at the bar and only two guys were there having an afternoon beer. Business may have been slow at times at Gerde's but it was never dull. The two daytime drinkers?...George and Bob
Posted by Porco at 11:07 PM No comments: 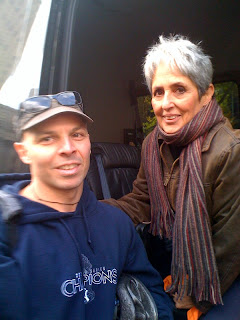 I've had the great honor to meet many of Gerde's graduates in recent weeks. Not long ago, there were first time meetings with Bruce Langhorne and George Gerdes. That same weekend, I had a reunion of sorts and a casual drink with Lucinda Williams. On September 25th, it was another reunion with Roger Sprung, Peter Stampfel, Terri Thal, Eric Weissberg and Barry Kornfeld. That same day, I met Paul Prestopino. On October 21st, a backstage invasion at a Clearwater event reunited me with Pete Seeger, David Amram, Guy Davis and Lucy Kaplansky. My hijinx were rewarded with first time meetings that evening with Suzanne Vega, Louden Wainwright, Tom Chapin and Arlo Guthrie. An historic march insued after that show as Seeger and Amram led the charge to "Occupy Columbus Circle" with music. Guthrie was there waiting for 400 protestors, myself included. (Gainfully employed, well heeled protestors...not only the unemployed and unwashed as the media may portray)

If it sounds like I'm patting my own back...well, maybe I am. Perhaps I should add to that by saying that I think I've done a fabulous job of not mentioning anything political on this blog. Quite a task, indeed, considering that world events have forever been topic matter for Folk Music artists. Folk artists, in turn, have always lent a helping hand to the movements themselves. Sometimes they merely foster awareness by lending their names and star power to civic causes they believe in. In other situations, they may find themselves at or near the tip of the spear, connecting leaders and their message to the rest of the world through the power of song. Few occasions in our history can we point to peaceful and pivital change having a soundtrack. America in the 1960s was such an age. The music, predominantly Folk, was being created for the times as they were happening. Those people creating it also brought it to the masses themselves.

Of course, most notably was the reluctant voice of his generation, Bob Dylan. His anthems of "Blowin in the wind" and "The Times they are a-changin" helped define the civil rights and anti war Movement of the mid twentieth century. The facilitator of that change was Dr. Martin Luther King. One of the most pivotal moments in time was his "I have a dream" speech given on the steps of the Lincoln Memorial in Washington, DC. Sending their musical message to the global crowd from those very steps moments before were Bob Dylan, Len Chandler and Joan Baez.

Ms. Baez was back in front of a crowd today using her siren's call once again in opposing the modern version of social inequality. The crowd was smaller but the stakes couldn't be any larger. Why do I say that? Well, it might be that, at this writing, the world economy is imploding on itself and the destructors who exacted the damage are in damage control as they desprately attempt to save the system the same way they always have: Putting the tax payers of the world on the hook in order to bail out failed banks, corporations and even entire nations. The people have finally had enough. Millions of jobs have been lost. Purchasing power has been erroded. Lies had been told by our leaders. And now thousands of like-minded citizens are finally off the couch and on the streets rising up, as it were.

The Occupy Wall Street movement is still unfolding. Day 55 as I write this. It's a leaderless revolution with a strong message of disgust and disenchantment of the economic warfare being waged against the free people of this world. Yet the objectives, demands and expected outcomes cannot be universally described by its participants. The "OWS" crowd is a modern day pot pouri of leftists, rightists and everyone in between of all ages. It has the feel of the 1960s except the "victims" appear to be everyone plugged into the rigged system. As my Grandfather Mike was quoted as saying about working through the flailing music business of the 1970s: We're all in this together.

The Occupy core group has proven to be a resiliant bunch. The exposure they've demanded by the corporate media has only brought more closet dissentors out of the woodwork. Ninety nine percent of the people cannot possibly be on the same page, but they all can see when something is seriously wrong. The current movement has also brought out the very figures who have stood tall against corporate oppression since early in their careers. Graham Nash and David Crosby performed at OWS last week. Peaceful sit-ins have sprung up worldwide. Some not so peaceful responses have also occurred but it has only strengthened the call for more solidarity amongst the People. And with that come the names from the past who have always believed that music has power and magic in it.

Today was Joanie's turn. And I couldn't pass up the chance to get close. She made her way to NYC and I just had to make my way downtown on the subway. Sure enough, as has been the case so often since I've chased friends of Mike Porco, she appeared right before me as I wandered "backstage" into a 12x12 foot tent where she was warming up. I told her who I was and a look of happiness ran across her face. She leaned her pretty head back as if to almost have a belly laugh only to nod back to the present moment to meet my eyes with a look of understanding. Her past met my future. She had known through her manager that I was on her trail to discuss Gerde's and Mike Porco. Her touring schedule made that difficult. But today was all about making conscious contact..... Shake her hand....show her that my intentions to pass on the Gerde's legacy are real and to make sure that she knows I'd like to see her again. I had no right to spend time with her any more than the other hundreds that were there but I made a point to get close. The Porco name travels well. I can tag along right til the end without her handlers poking a finger in my chest asking "who are you?!" I know that she's working and I ask only for a moment.

We held hands a few seconds as I asked for a photo with her. I've lived long enough to know when someone is real and when someone is putting you on. She's real. I've met enough of the Folk City performers to know if someone was "just a performer" there or if someone got to know Mike Porco and got to know Gerde's. Joan knows. This blog entry could rattle on for a while denoting the connections between her, Gerde's, Mike Porco and Gerde's favorite son, Bob Dylan. In short, she was there. She was there in the 60s and she came back to celebrate Gerde's 25th anniversary in 1985. Joanie knows Mike.

I thanked her warmly for the moment. I told her that I hoped I'd see her again. And for some reason, thanked her for coming as if I spoke for the OWS. In a way, she did come for me because, after all, we're all in this together
Posted by Porco at 11:11 PM No comments: