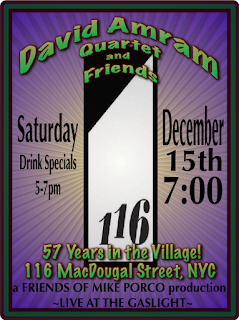 During a lush life filled with good fortune, David has done it all. He identifies himself as "a full-time composer who is also an improviser, a conductor, a free-association scat singer," but that hardly covers the range of his work.

As a young man, jam sessions hosted in his basement apartment have included Charlie Parker and Dizzy Gillespie. He's befriended and performed with nearly every Greenwich Village artist during the Folk and Blues Revival from Bob Dylan to The Roches.
He was the first composer-in-residence for the New York Philharmonic chosen by Leonard Bernstein, himself.

He's conducted symphonies in major cities around the world and plays instruments from over 3 dozen different countries.

David composed the score for such films as 'Splendor in The Grass,' 'The Manchurian Candidate' and collaborated with Jack Kerouac on the landmark 1959 documentary 'Pull My Daisy.'
And he's still just warming up! An endless supply of goodwill and thirst for experience has driven Amram to do what he does: Inspire audiences worldwide.

"Listening to the AM radio in the 1930s, they had jazz and symphony music coming out of the same machine," David quips. Perhaps that explains why it was natural for him to integrate his classical training with Jazz, Folk, ethnic, Native and Latin music. This blend has led him to become a common thread between a venerable tapestry of post WWII American poets, musicians and artists.

Been there, done that.

It's an old cliche but how can it not describe the career of David Amram?

Been there. Done that

No more room left to tell about David. Let a couple of friends sum it up:

TOMORROW and UPCOMING shows at the Gaslight


Friends of Mike Porco LIVE at the GASLIGHT
UPCOMING EVENTS:

December 15-
DAVID AMRAM Quartet and Friends
57 years in the Village! Celebration of a man who brought music to the far corners of the globe. He traveled a million miles only to come back home.

January 19- The FOUR O'CLOCK FLOWERS
Jalopy Theater standouts play for all the marbles. You miss them, your loss. Like clockwork, the new Gaslight house band stuns the crowd every Monday with top shelf vocals and a world of talent. String master Ernie Vega and the scintillating Samoa Wilson cook up Roots, Gospel, Blue Salvation and standards.

March 16-
World premiere of IN THE CAN. Musical actors to beat the band. Details later.

May 18- Freewheelin Jam. Several artists performing live at the Gaslight to play the entire album.
50th year since the release of "The Freewheelin Bob Dylan." Should be a doozy.

******Other shows mixed in as they materialize
Posted by Porco at 10:14 PM No comments: 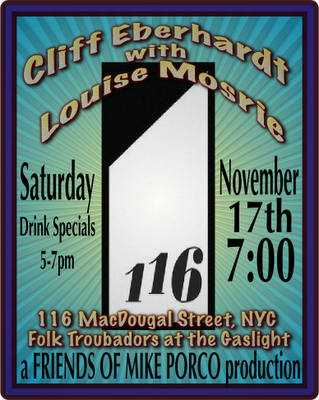 At a young age Cliff Eberhardt knew he was going to be a songwriter. His Dad introduced his children to music and Cliff quickly taught himself to play guitar. He also had the good fortune of living near a venue where James Taylor, Joni Mitchell, Howlin' Wolf, Springsteen, Muddy Waters, Bonnie Raitt and Mississippi John Hurt performed though out the year. At home, his parents exposed him to standards by Cole Porter and Ira Gershwin. As an adult, he learned how to blend all these influences to make his own unique sound.

Cliff moved to NYC in 1978 and began playing in all the great Greenwich Village clubs. Time well spent at Gerde's Folk City, run by Mike and John Porco, proved how New York was an "ideal musician's boot camp." Gerde's was the legendary club where musicians had congregated for many years to create music together, promote each other to new heights and learn from the masters passing through.

Eberhardt became a professional in a Village that had a vibrant and supportive music scene. Cliff and other luminaries like John Gorka, Suzanne Vega, Lucy Kaplansky, Julie Gold, Steve Forbert, Christine Lavin, and Shawn Colvin stood shoulder to shoulder and recorded music on a monthly basis. Later in his career, his voice was heard by millions by doing vocals for Coca-Cola, Miller Beer and Chevrolet commercial spots on TV and radio. His recording career has been committed to his original songs. It's a catalogue of sincere ballads and swaggering stories that draw sincere emotions from his audiences, attributed mostly to Cliff's sincere delivery and musicianship.

Born in Delaware and moving to the South as a child, Louise began writing Pop/Folk songs in her early 20s while living in Knoxville where she's produced two independent albums. Her latest release, "Home,"  featured a #1 Song & was the #1 Album on the Folk DJ chart. Her original songs combine Americana, Bluegrass and Folk melodies that tell stories of the joy, love and struggle of the deep South. Through the use of vivid characters and scenery, she creates a world of Southern life in lush detail.

Louise is an emerging star building a National audience. You don't want to miss her!

Please join us this month at the famed Gaslight Café as we welcome two Road Warriors to a club where their craft is king. At a time when New York needs to heal, music becomes more than entertainment.