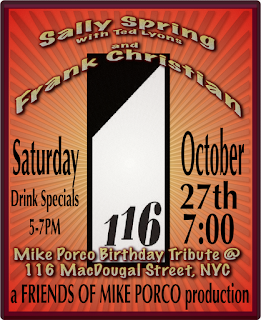 Mike Porco made thousands of friends when he was owner of Gerde's Folk City from 1959-1980. Hundreds of those were the musicians who played on its stage.

Tonight, two FRIENDS OF MIKE PORCO will honor him by performing live at the Gaslight in the first annual Mike Porco Birthday Tribute show.

Frank Christian is the guitar virtuoso heard on over 50 albums recorded by people like Suzanne Vega, John Gorka, Christine Lavin, The Smithereens, Dave Van Ronk and most notably, Nanci Griffith. Frank accompanied Griffith on tours around the US and UK playing to crowds at Carnegie Hall and Royal Albert Hall. He has written and recorded a couple albums of his own and remains a much sought after studio musician and composer.

Sally Spring burst onto the Greenwich Village scene right around the time Mike Porco was considering retirement. He has seen it all and simple words of encouragement to Sally inspired her as she continued on to tour the world. Her most recent release, 'Made of Stars,' held the #1 spot on the UK Americana charts. Sally may be considered one of the original artists to have helped establish the modern "Americana" sound.

Her husband Ted Lyons accompanies her on tour and in the studio on multiple instruments. The two make beautiful music together!

Christian and Spring may have different styles, but their connection to Mike Porco and Gerde's during their "early days" in the Village make them perfect choices for this show.

Ninety eight years after his birth, join us as a couple of surprise guest musicians who knew Mike best honor him and Folk City with a song or a story before the main event.

PRESS ON SALLY SPRING:
The force that has driven her musical journeys and achievements is "that singular ability to touch people's souls with song, to bring the emotion rising from deep inside the listener," notes the Winston‐Salem Journal,
"She's a treasure." notes Gene Parsons (The Byrds).

“One of Frank Christian's fortes is the ability to write new songs that sound like standards—instant classics...
One of New York's finest talents."
-Boston Globe

DANNY KALB AND STEVE KATZ LIVE AT THE GASLIGHT

In May of 1965, the Gaslight Café on MacDougal Street hosted the second ever gig of the BLUES PROJECT, a band formed by Kalb and fellow guitarist and harmonica player Steve Katz. They would later play on TV regularly and perform coast-to-coast with the likes of Richie Havens, Stan Getz, Muddy Waters, Chuck Berry, Jimi Hendrix, The Who and a virtual who's-who of the Greenwich Village Folk and Blues scene. They forged a sound unlike any other combining Blues, R&B, Jazz, psychedelia and Folk Rock.

Music critics have said, "Liverpool had the Beatles, but New York had the Blues Project."

Steve Katz went on to be a founding member of Blood, Sweat and Tears soon earning three Grammys and recording three #1 hits. In his spare time, he produced music for Lou Reed and was the Vice President of Mercury Records. But playing the Blues is the name of the game for Steve.


After nearly 50 years of camaraderie and reunion shows, Danny Kalb and Steve Katz are finally coming back to 116 MacDougal Street, The Gaslight. This is hallowed ground to all the musicians from the 1960s. The FRIENDS OF MIKE PORCO series at the Gaslight has hosted one show after another with musicians who called the Gaslight, Café Wha? and Gerde's Folk City home. My grandfather hired so many of them at Gerde's when they were young. Come see how they STILL deliver the goods.

Shows like this only happen once and then they're gone! Don't miss this one! SEATS ARE LIMITED. 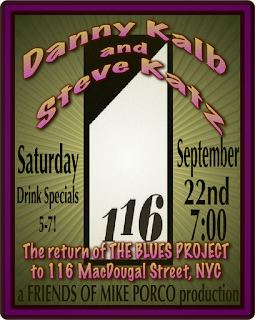 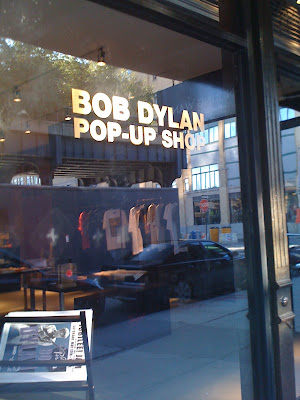 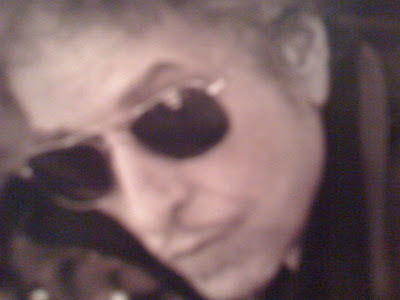