FRIENDS OF MIKE PORCO AT THE GASLIGHT 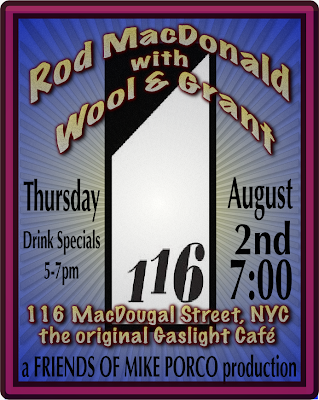 Voices of The People return to MacDougal St!


A true folk singer at heart, ROD MacDONALD's place in the Folk hall of fame is assured by his hymn-styled 'A Sailor's Prayer,' a tune mistaken for a traditional song. His one of a kind sound has hints of rock, pop, country, light jazz, and blues.

Honorably discharged from the service as a conscientious objector in August 1972, his calling to be a professional musician rang louder than a path practicing law…to our benefit!!

Rod is also a co-founder of the Greenwich Village Music Festival and an original member of the Fast Folk Co-op.

He's made 35 tours in Europe since 1985, nearly all of them with NYC bassist Mark Dann, an accompanist and engineer with hundreds of recording credits to his name.

MacDonald tours South Florida with the Bob Dylan cover band, Big Brass Bed, but his original classics can fill the night with song.

Bev lead her band The Human Condition to national prominence in the early 1970s.She was one of the radical upstarts in Greenwich Village coffeehouses when the Village still felt bohemian and revolution was in the air.

Strains of rock, Latin music, R&B, pop and more easily fused with the essence of smoky folk clubs.Grant was on the bill of Ochs' 1973 festival, "An Evening With Salvador Allende" at NYC's Madison Square Garden.

New England native INA MAY WOOL has also spent years on the road with bands as well as in studios doing session work. She serves up an eclectic mix of the jazz, blues and country influences with a wry, unmistakably urban sensibility.

Since joining forces, WOOL&GRANT have earned an ever growing group of fans for their unique mix of two very distinct voices.

COME JOIN US for some mid-summer fun!!

THE WATER AROUND U.S HAS GROWN

LADIES NIGHT AT THE GASLIGHT CAFE 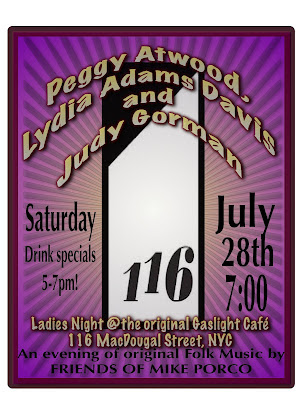 Their careers reach back into the glory days of the Greenwich Village Folk scene of the '70s. All three have graced the stage at Mike Porco's Center for Folk Music, Gerde's Folk City.

PEGGY ATWOOD's music caught the attention of an Aspen local named Jack Hardy. They both would eventually take their talents to New York and make historical recordings with the Fast Folk Co-op: A collective group bent on recording new songs every month. She keeps the Songwriter Movement alive by spearheading the well known "Northern Country Music" shows near Woodstock.

Recording artist, singer/songwriter, LYDIA ADAMS DAVIS weaves a beautiful voice with her captivating melodies for audiences of all ages. Called a "Splendid performer" by The New York Times, Peter Yarrow has also said “Lydia combines warmth and magic to bring the long history of folk music home to your heart.”

JUDY GORMAN's personality shines through in her bold-as-brass delivery. Yet she can sing in a quieter, more compassionate tone to express her original songs.
Pete Seeger praised Judy's music and spirited message by saying that she "Shoots the arrow straight to the heart; a wonderful singer & musician."

All three of these FRIENDS OF MIKE PORCO cut their musical teeth on the streets of the Village and they're back on MacDougal for this heartfelt evening at 116!