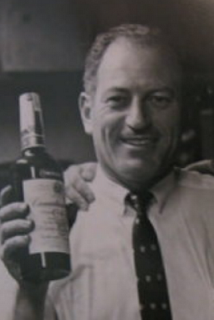 On the anniversary of Mike Porco's birth, I thought I'd re-post a tale of the early days of his adulthood and his first experience in America.

Michele had worked in the rural province of Calabria since the age of eight when his father apprenticed him to a carpenter. It was hardly uncommon for pre-teens of the Old World to have their vocation decided for them by their parents and Michele proved to be a fast learner and a patient woodworker. Young Michele (pronounced Mick-EL-eh) continued with school but it was clear to Angelo Porco that his son's abilities were best displayed by his handy work. His early calling was in the fine skill of cabinet making and he was proficient enough in that trade that by age 16, he had opened his own shop making cabinets and doing woodworking jobs for the townsfolk.

Just two months beyond his 18th birthday, Michele received a long awaited post from New York where his father had gone months before. In it, Angelo summoned his eldest Son to leave his mother and three siblings behind to be with his father and fashion a new life in America. Michele, like millions of European immigrants before him, had dreams of inventing himself in the Land of Opportunity. The only promise he had was from his father saying in the letter that he would meet him at the pier when his ship came in to new York.

Finally, the day planned by his father was upon Michele. In January of 1933 he packed a trunk bound for glory and rode a train 450 miles up the Mediterranean shoreline to Genoa.


The work-strong Michele dreamt of making his way in America the way many of his cousins did before him. He and his father had known of several families that had already settled in New York City from their homeland in Calabria. Michele's father had shuttled back and forth during the last decade to work with extended family members and Angelo had plans to enhance the Porco family's prospects by adding a hardworking wage earner. Armed with little more than half a lifetime's experience in a trade and a wealth of ambition, he readied himself for the adventure of his life. He would later Americanize his name, simply, to Mike.


The Conte di Sevoia arrived in New York harbor in the early hours of the 2nd day of February. The forecast called for a sunny day according to the New York Times. Now with his official papers in hand, Michele was eager to reunite with his father; an event he envisioned happening over the course of transversing the 4600 mile trip to the America.

The melee of welcomers and new arrivals was just another everyday occurrence for the Immigration workers on the pier. For Michele, it was a maddening chore trying to find his father's face in the crowd. Finally, a familiar voice cried out his name from a distance. Again the voice called for 'Michele'. Michele stopped in his tracks unsure of why it wasn't his father's voice. It was a passing thought. He soon recognized the voice of his uncle getting louder as he neared his space. A joyous hug and a tear of a bittersweet welcome accompanied with an awkward silence unexpected by Young Porco.

Tio Luigi had dreaded this heart-wrenching moment. He had to find a way to welcome his kin to the New World and, in the very next breath, tell the boy that his father had died shortly after sending his last letter home to Italy.


The definition of Mike's new beginnings in America had now been instantly altered into a challenge to not only start from scratch but to make his way virtually on his own.

He would have little time to mourn as his fate awaited him in the morning of tomorrow. His fighting spirit surely took a devastating blow from behind on the pier that day but perhaps it was from this absolute emotional bottom that Mike Porco cultivated a level of quiet determination that he would harness and use for the rest of his life in New York. Here at the lowest point of his young life, little could he expect that he would one day play a crucial role in facilitating the revival of a musical movement that would define American society for decades to come.

Mike would eventually offer a stage and a week's pay to every singer-songwriter who was able to muster up "a following." They came from all over the country in hopes of becoming a star in Greenwich Village. But first Mike had to pick himself up and follow his own star.
Posted by Porco at 8:03 PM