All Blues, all the time 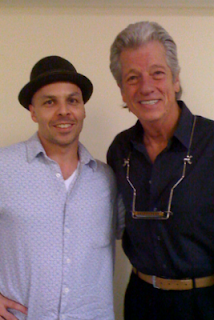 He was known as Jeep by his friends in the Village.

But don't call him "Junior." He's his own man. A Blues man. A Hall of Famer. And it was plain to see why last night.

But at first, I had to shake my head and re-focus my eyes because I couldn't believe what I was witnessing. John P. Hammond, this soft spoken gentleman whom I was fortunate to share conversation and dinner with just an hour prior, was transformed into a man possessed on stage right before my eyes.

The man quietly thanked the crowd for coming and introduced his opening song. He began picking and blew into his harp and from the first howl, everyone in the room knew that this was no vocation for John. Somewhere during his life he had become one with the Blues and this was his way of expressing that obvious fact.

The way he sang and lamented, I really believed that he was all broken up inside. I really thought he was at the end of his rope. I really thought his heart was achin' and his baby didn't love him no more. I almost felt bad for the guy. He used the harmonica like a breathing apparatus. It was if he was taking oxygen from IT instead of him blowing his soul through it. It screamed and wailed as his head sunk low between his shoulders enabling him to better heave the sound from his insides through it. His eyes closed, his cheeks puffed and collapsed as his fingers and hands acted on instinct transporting the spirits long gone Bluesmen from an earlier time into that café. His words told stories told to him.

Between songs, the smile and peaceful, sometimes even shy conversation returned. The blues beast was well hidden from view for the moment but we all knew it would rear its head again even more gutteral and more serious than during the last tune.


I had to remind myself that this was the same guy who was sharing fun tales about his early days at Gerde's in 1962. He talked about the shindigs at the Broadway Central Hotel and at Victoria Spivey's apartment in Brooklyn. He loved playing Folk City.

"Folk City was THE club in the village. The Blues guys that came through all stayed at the Broadway Hotel for $4 a night and they all played Gerde's."