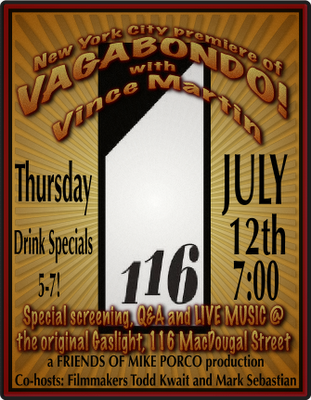 VAGABONDO! is the documentary from Todd Kwait and Mark Sebastian about the Singer/Songwriter VINCE MARTIN.

An unlikely film arose depicting two folk music veterans revisiting the places where they lived and made music; Coney Island, Brooklyn and Greenwich Village.
Through their conversations, we see the importance of music and its positive impact on the human spirit.

To wander the streets of New York City with folk musician Vince Martin is to walk back in time to the buzz and holler of Greenwich Village in its beatnik heyday. From an unlikely beginning, Brooklyn-native Martin quickly rose up the charts with the 1957 hit "Cindy, Oh Cindy", backed by the Tarriers. This earned him both popularity and scorn in the strangely competitive world of the Village music scene. But then his songwriting collaborations with Fred Neil, culminating in the influential 1964 album Tear Down The Walls, laid down the sound that became ‘60s folk.The film is a show-biz romp with one of the last genuine New York characters. It gives the viewer a seat at the table as Sebastian explores music, women, morality and mortality with the tough-talking folkie senior. (READ: F-bombs)

With a song on his lips, the singer transmits his intense love affair with life as a vagabondo, his Italian grandfather’s unflattering word for a wandering minstrel.
"Singing, that’s the only way I know to go." To spend an hour with Martin in the film Vagabondo! is to have your own lust for life refreshed.

Join us for this very special evening with the man himself, Vince Martin, as we watch the film and open discussion with the filmmakers, Todd Kwait and Mark Sebastian. LIVE MUSIC to round out the night, as it should!!!!!

Special screening, Q&A and the power of song all for the price of admission. What's not to like??