FOUR O'CLOCK FLOWERS AT THE GASLIGHT 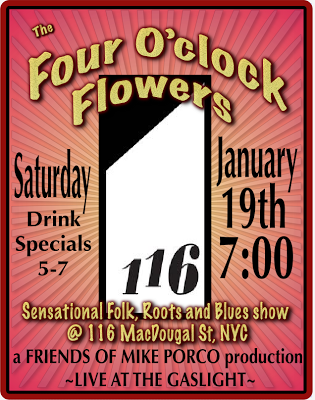 The FRIENDS OF MIKE PORCO series at the Gaslight has featured many of the original artists from the Folk and Blues Revival of the 1960s and 70s.

This January 19th, 116 MacDougal is proud to showcase a duo formed only a couple of years ago- the Four O'clock Flowers.

String master Ernie Vega and the scintillating singer Samoa Wilson perform stark versions of Country Blues, Gospel-blues, Old-Time, & Jazz classics (as well as original compositions) that are stripped down to their barest elements. Sounding like ghosts from a by-gone era, they illustrate the simple elegant power of these great songs.


Their pairing is relatively new, but they're not new to the scene.
The legendary Jim Kweskin, whose history goes back to the birth of the Cambridge Folk scene, said he revived his respected jug band and his career a few years ago for just one reason: to introduce listeners to the young vocalist Samoa Wilson. Some years later, she met Ernie Vega at the fabulous Jalopy Theater, a venue fast becoming Brooklyn's center of Folk, Roots and the Art of the Jug.

Their synergy was apparent to each other since day one. Wilson's diverse influences paired nicely with Vega's command of a broad repertoire of songs.

The duo grips their audiences right from the get-go. The heavenly vocals of Samoa Wilson and the fiery guitar and harmonica of Ernie Vega will transport you to a time when the Village was still bohemian and old-time music was all there was.

"Samoa Wilson, lithe, modern and powerfully gifted in voice, brings a cutting edge vision to the ensemble. There is, conversely, something about her presentation that defies the moment."


I really couldn't think of a better way to wrap up the first year of the FRIENDS OF MIKE PORCO series. After all, it's about connecting generations with the power of song. SAMOA WILSON and ERNIE VEGA are worthy torch bearers for the future of the NEW Greenwich Village scene. Please come and enjoy!!