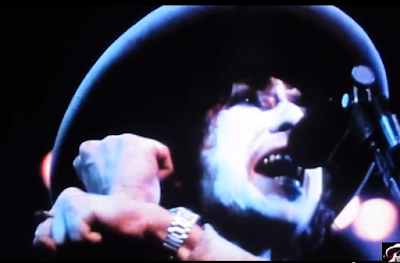 In October of 1975, Mr. Dylan was hanging around the Village quite often.
He was wrapping up his recording sessions for the DESIRE album and was spending time
with lyricist and Broadway producer, Jaques Levy, in New York. They were plotting a tour. What kind of tour…?
only they knew.

Dylan had returned to the road with The Band in 1974. His most critically acclaimed album,
(perhaps ever)
BLOOD ON THE TRACKS, was on the store shelves for less than a year. The Basement tapes
had finally been released only 4 months prior.
His fans were eager for more. He had returned to the front of the pack with a vengeance.
Any ol' tour could have satisfied. But Dylan had something majestic in mind.
~~~~~~~~~~~~~~~~

The main word-spreaders of this historic event were Larry "Ratso'' Sloman and
Songwriter, David Blue.
Within hours, ''every Folk singer you could imagine'' descended on Folk City
to become a part of this happening.
Some other luminaries also came to sing and hang out. Bette Midler, Patti Smith,
Eric Andersen, Tom Waits and Allen Ginsberg were there. 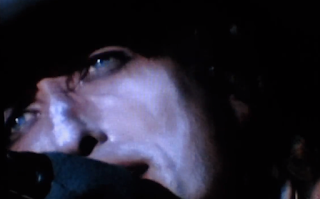 As it turned out, every Folk singer (except for Dave Van Ronk)
really did show up for the party. It went into the wee hours with Phil Ochs
taking the stage as the Friday sun was dawning.
But in the hours (and hours!) prior to that, Folk City was,
as Rob Stoner told me for my documentary
POSITIVELY PORCO,
''The very nexus of the cultural universe.''

Of course, everyone was waiting for Dylan and he didn't disappoint.
He took the stage with the Queen of Folk, Joan Baez, for the first time
in years. They sang 'One too many mornings' and an old traditional tune.
The crowd who was there still talks about this occasion to this day
with utter amazement.

How could Bob Dylan, at the height of his career, choose a 3rd Street bar to kickoff
an historic tour like Rolling Thunder?
Why?
Well, Mike Porco was his friend. Gerde's Folk City was where it ALL began for him.
It was the best place to showcase it.
And Mike's birthday…well, it wasn't forgotten. Happy Birthday was sung for him
about a dozen times that night.
Footage of the cake and a warm hug between
Bob and Grandpa was taken by the crew and seen by me 39 years later.

And the tour itself…?
Well, let's just say, it's history now. 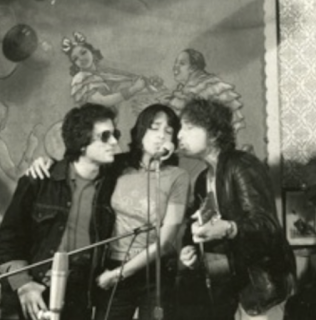 The NIGHT OF THE HURRICANE
was a concert ending the first big leg of the Revue.
As with all the shows in this Medicine Show, each performer asked to come on tour
played a set of their own followed by a set of Dylan culminating
in a final sing along and bow.

At The Night of the Hurricane, Dylan's mother, Mike Porco and virtually
everyone else ''behind the scenes'' were invited on stage for the finale.

Madison Square Garden. Packed house. Italian immigrant and steadfast supporter
of Folk and Blues, Mike Porco, finally realized what it was like
to be applauded by 19,000. A hug from Bob Dylan was enough for him
and that's what he got. 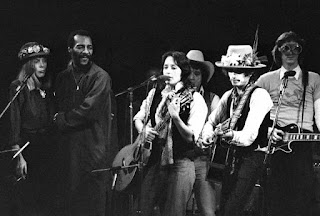 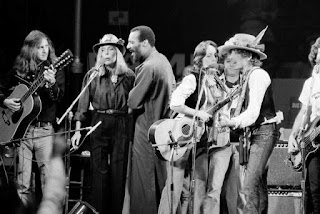 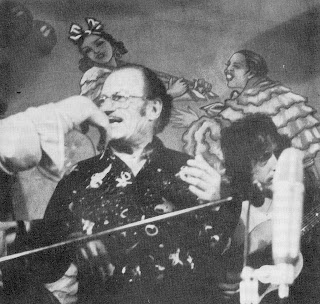