Below is a page out of Izzy Young's journal.
The date was February 16, 1960.
Logan English was the Emcee and, likely, warm up act in front
of Charlotte Daniels.
Izzy was just in month 2 of booking music at the new club
on West 4th and Mercer.
Izzy had his finger on the pulse of the Folk Music scene
in America at the time.
He took great care in documenting the 'who and what' was happening
at every show.
Along with counting heads and dollars, he made note
of special personalities coming in to watch
and potentially sit in for a guest set.
You'll see here in this scan that a young musician from the Boston area
had made her first visit to Mike Porco's restaurant.
For the first 5 months
under Izzy
the club was called THE FIFTH PEG at Gerde's.

Miss Joan would eventually make her name widely known
by performing on much greater stages.
It was at Gerde's where she met a boy named Bobby
about a year later.
This was her first visit to
New York's Center of Folk Music. 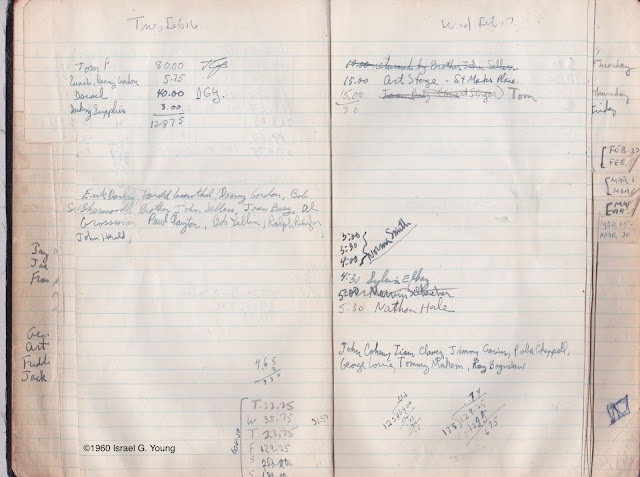