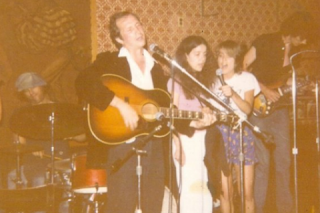 I was beyond pumped up for this past weekend to roll 'round. I had secured an interview and backstage access with Lucinda Williams while she toured through NYC. We made plans to meet on Thursday night to talk about her Folk City days and on Friday, I was going to the concert where she hooked me up with VIP passes, too.  I had also gotten tickets to see Willie Nile perform up near where I live on Sunday the 13th. Originally, I had plans to take Willie Nile along with me to see Lu since I knew they've been buds for a long time, but it didn't work out that way. In the mix of all this, I decided to set up a guitar lesson with Terre Roche Friday afternoon, as well.

Jack Hardy had told me that the Roches were the best harmonic singers he had ever seen.

Terre and I worked on the basics. And timing.

Unbeknownst to me, the death of Jack Hardy was also part of the weekend plan. Not mine, of course. But it was in the cards, like it or not.

It's amazing to me how the highs and lows in life can be experienced at the same time.

I met Ms. Williams at the hotel bar where she was staying. She booked an interview with someone else before me and it sounded like I was bringing up the rear. I had visions of chatting with her and being invited to dine with her afterwards. If not, I'd just ask to join in anyway...but that's just me when I'm hungry.

Well, the conversation was as fun and easygoing as could be expected. People always say, "I don't know if I can add an awful lot" yet it's really their own opinion that I'd like to hear. A perspective gained from experience is worth hearing and she had more than I had expected. Mike Porco introduced her to Dylan at Gerde's for the first time and she called her time at Folk City a very important part of her career. "It was home to me for a good while".....that's all I needed to hear. And, of course, Jack's name came up before I knew of Jack's demise.

The vision I had held true. I joined in the fun with her gang downstairs in the restaurant as it was way too stormy to step foot outside.

The next day, I got wind that Jack had died. Piecing the puzzle together, I came to find out that very few people knew he was ill at all. Jack wanted it that way. It was just under a month. Enough time for Jack to line up his cherished goodbyes, I hope. Not enough time for the rest of us in this "tribe" to fully grasp. I'm very thankful that I was included in the phone chain that linked to inform and console, but very few seemed to have a good understanding of how or why so soon.

As Jack would say at his Songwriter's meetings every Monday, "Shut up and sing the song."

Jack loved Mike Porco. If anyone helped keep Folk City's doors open near the end of Mike's stewardship, it was Jack Studdebaker Hardy. He dedicated his 1976 album MIRROR OF MY MADNESS to him. He emceed the Folk City Hoots for years. Somewhere along those lines, I felt connected to it all through Jack.

At one point on Friday, I thought, "should I be the one to tell Lucinda Williams that a mutual friend has died??!" Although she and I had been in contact for a year, I just met her in person yesterday. She's high on life with this new album and she's busy gigging...I shouldn't bring bad news to the table.

I held my tongue later that night over dinner. (Backstage is a euphemism for a Hot Spot down the street) Lucinda was full of good energy from the warm crowd and the stellar show. As I expected, Jack's name came up again more than once as we talked informally about the old days.

Tell me about the bar scene back then, I asked.
"Well. There was an awful lot of Jack."
Jack Daniels??
"No. An awful lot of Jack Hardy!"
We shared a snicker and I left her smiling about Jack. I think that's best.

She also said that Frank Christian's name flashed in her mind during the show. Another friend who knows Jack.

Willie's performance was so uplifting. His timing couldn't be any better. Really. In every sense. He plays with such zest and his voice and lyrics are powerful. It was a nice finish to a wild weekend. After the show, I finally got a chance to speak with him face-to-face. He was kind enough to do a phone interview with me last year and we, too, had been in touch since then. I only had a moment to say hi and thanks at the reunion itself, so standing with him in conversation felt like seeing an old friend.

To date, I've heard more about Jack's final days. He was as brave and witty as he had come to be known right up until his final hours. In an attempt at dark humor, I told Mr. Massengill that Jack should have died years ago...he would have sold more albums.

David said, Thats what Jack said in the hospital.
Posted by Porco at 9:38 AM