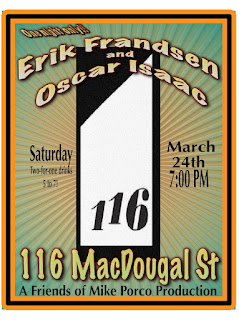 Well into his 4th decade as a performer and showman, Erik Frandsen has developed an encyclopedic repertoire of Jazz, Blues and Folk standards. From Basie to Sinatra to Robert Johnson, Erik continues to 'wow' audiences with his effortless skill on guitar. Combined with his romantic and witty originals, it's no wonder why the Boston Globe has called ERIK FRANDSEN "The straight Cole Porter." Erik's entertaining style on stage can hardly be replicated.

Trained in the Arts at Juilliard, OSCAR ISAAC displays his versatility as an actor who needs no stand-in to expertly play any traditional or contemporary Folk, Rock and Roots songs. The star of several feature films, OSCAR ISAAC is currently on location in NYC shooting the latest offering from the Coen Brothers, Inside Llewyn Davis- a fictionalized account Dave Van Ronk's autobiography, The Mayor of MacDougal Street. Not so coincidentally, in the movie, Oscar plays Llewyn Davis, a musician who makes his name and earns his keep at the Gaslight.
The venue for this show is, in fact, the very space that was once the most coveted gig on the coffeehouse circuit. Today, 116 MacDougal Street is the proud custodian of the history and tradition of the old Village Gaslight Café.

This show is one in a series of events hosted by FRIENDS OF MIKE PORCO, the former owner of Gerde's Folk City. Doors open at 5. Show at 7. $10 at the door or in advance at http://www.eventbrite.com/event/2977155753

SPACE IS LIMITED. Come early! Two for one drinks 5pm-7pm