PACHECO AND AMRAM RATTLE AND HUM 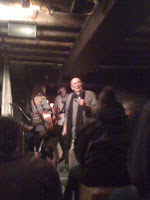 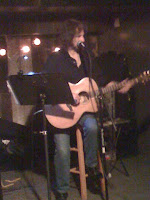 The Tom Pacheco and Alana Amram show was a great success!!

A packed house full of friends, new and old, were treated to an astounding show put on by Alana and the Rough Gems. Alana came through with her lovely voice and stage presence earning a place in the memories of those seeing her for the first time. This was Alana's first gig on MacDougal Street. She got a helping hand from Greenwich Village icon as legendary singer Vince Martin joined Alana on vocals for an unforgettable rendition of his beautiful song, "Snow Shadows."

Tom's set was full of energy from the moment he stepped on stage. He's known for his ability to pull his audience on stage with him and this show was no exception. The intimate setting of the old Village Gaslight was more than fitting for a man who sings about the unifying force that binds us all together. Happy to be back on the street where it all began for him, Tom made believers of the folks seeing him for the first time.

With the intent to forge new alliances between the veterans of Folk City with the up and coming Folk, Rock and Roots stars of today, FRIENDS OF MIKE PORCO got off on the right foot with the pairing of the great Tom Pacheco and shooting star Alana Amram.

MANY thanks to Michael Patrick for video taping the event and streaming it on the web for those who couldn't make it to the show. Lots of fans around the US and Europe were tuned in to see and hear the fist ever FRIENDS OF MIKE PORCO production at 116 MacDougal Street. Unfortunately, some of the audio for Alana Amram and the Rough Gem's set was lost. Tom's set was captured in its entirety, however. A work in progress but very thankful that there was a recording made of the magical evening.

Link to the show can be found HERE