FOLKS FROM LEFT OF CENTER AT THE GASLIGHT 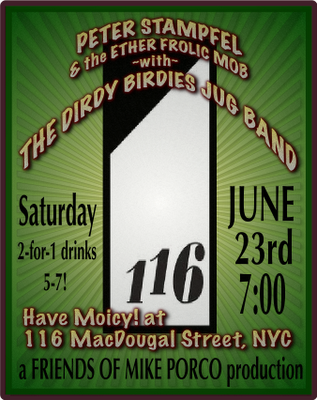 Get your freak on!
Kazoos, banjoes, washboards, a Galvanized tub and other appliances.
~~~~~~~~~~~~~~~~~~~~~~~~
Since rolling into New York for good in 1959, PETER STAMPFEL has been widely credited as a pioneer in the Psycho-delic Folk genre. In fact, he and Steve Weber of the HOLY MODAL ROUNDERS, first coined the term "Psychedelic" and applied the vibe to their music. They were able to take Roots Folk songs and distort it into something very, very different! Psychedelic Folk soiled its oats in the Lower East Side and gave rise to the New York City Punk scene.

The Holy Modal Rounders were almost the very definition of a cult act. Their legend grew larger after having their songs appeared on the soundtrack for the cult classic movie, "Easy Rider."

Stampfel has played with several different groups of musicians over the decades and records music to this day. He's recorded with Yo La Tengo, They Might Be Giants and is the only living man to ever perform with Bob Dylan, Buckminster Fuller and Mississippi John Hurt. Have Moicy!!

Tonight, Peter Stampfel is here with the Ether Frolic Mob...a collection of like minded musicians….what can go wrong!

What more can one say about the 'World's Most Dangerous Jug Band'?

Formed in the spring of 1965, on the campus of Montclair State College in New Jersey, THE DIRDY BIRDIES JUG BAND was originally intended to perform for only two appearances at the annual Spring Carnival Weekend. However, the response to the performances was so encouraging, and the members of the group found performing so enjoyable and invigorating, that they decided to continue performing throughout their college years and beyond.


THE DIRDY BIRDIES JUG BAND increased their repertoire, sharpened their stage performance, and expanded their circle of performing venues to include many of the more prestigious folk clubs in Greenwich Village: Gerde's Folk City; The Bitter End; The Village Barn; The Red Garter; and The Cafe Wha?

They're still together, and still working on their masterpiece. It won't be possible to keep from smiling!


It's A SUNNY SATURDAY at the original Gaslight Cafe

FRIENDS OF MIKE PORCO present the wildest show at 116 MacDougal Street yet!

Join the fun with Peter Stampfel and the MOB and Jersey Jug Band....what could be mo' better?