THE WEEK I FELL UPON RAMBLIN' JACK AND JOSÉ FELICIANO 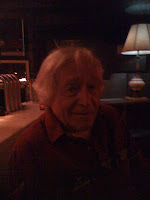 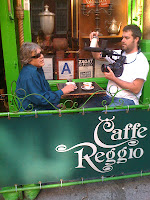 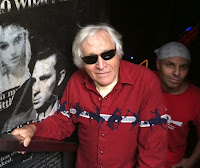 .....More like Ramblin' Jack stumbled upon me!
I was downtown on my bike last Wednesday to hang a couple of posters at 116 MacDougal Street to promote the Stefan and Roy show and I was delayed by a phone call and then by an issue with the glass case outside the venue...and just as I was about to leave, in walks, like a vision, Jack Elliott. This was 4:30 in the afternoon. No one was there but the bartender, Omar, and myself. But Jack, his friend Jack and his road manager, Rick were in the neighborhood having coffee. They decided to walk down the stairs to what they remembered was the Gaslight address. They were right, and I was astonished to see him! I was very happy that I was able to welcome him back. We hung at the bar, naturally, while Reggae Dub played on the PA system. And Jack and Rick, an old friend of Arlo's, told stories of Johnny Cash and Dylan and all the usual suspects. Jack was in town doing a show the night before at the Highline Ballroom to which he said was one of the best shows he'd ever done..ever! Mainly because the crowd was silent, he said. I hope to book Jack back on his home turf sometime soon.

Then, two days later, after walking around lower Manhattan with an out of town friend, I decided to end the afternoon with a drink at 130 W. 3rd. The Fat Black Pussycat is there now but that is where Gerde's Folk City stood for the last 16 years of operation. On the way, walking north on MacDougal, we spotted a small film crew interviewing a man having a cappuccino at the famous Caffe Reggio. As fate would have it, it was another friend of Mike Porco. And I'm proud to say, a friend of mine, as well. It was José Feliciano! Of course, he didn't see me approaching but I politely interrupted his chat to say hi.

"Oh wow! Hey how are you?! Do you know not a day goes by...and my wife Susan can back this up...where I don't say Mike Porco's name or mention Gerde's? I mention Gerde's on stage every time I'm up there. And your grandfather made the best lasagna!!"

I didn't want to bother him much more but he didn't want me to go. So I gladly stayed and talked with him about the things I've learned about he and Folk City and his contemporaries. We talked about John Hammond Jr., Buffy Sainte Marie, Pat Sky and John Porco. But also we talked about John Wynn and Orriel Smith and The Café Wha?.

What great fortune for me to know and see these folks! If I'm lucky, I'll be able to offer them a stage to perform on just as my grandfather did 50 years ago. Fingers crossed!!