LEGENDS OF THE FOLK AND BLUES REVIVAL RETURN TO THE GASLIGHT 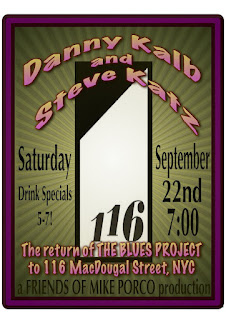 The experimental mindset and talent that redefined musical genres and boundaries during the 1960's Folk and Blues Revival will be back on display at the SAME VENUE where it all began!

DANNY KALB has long been recognized as one of America’s foremost guitarists. He is best known as the founding member of the legendary BLUES PROJECT along with STEVE KATZ and Al Kooper. They developed a strong national following and influenced untold numbers of aspiring young blues guitarists.

Kalb attended the University of Wisconsin but couldn’t resist the pull of Greenwich Village which was in the midst of a musical explosion boasting the likes of Bob Dylan, Jimi Hendrix, Richie Havens, Eric Anderson and Odetta. As a protege of the great Dave Van Ronk, Danny established himself on this seminal Folk and Blues revival scene, first as a solo performer and session player with Phil Ochs, Pete Seeger, Judy Collins and Bob Dylan.

The BLUES PROJECT was founded in 1965. One of the classic bands of the period, their The Blues Project Live at Cafe Au Go-Go won great critical acclaim and won them their first gold record. On this album Danny’s signature tune “Alberta,” a soft ballad and “Down To Louisiana,” a rocking electric blues, established him as one of the preeminent blues players of his generation. Four albums followed that cemented their place in rock history.

The Blues Project became a casualty to personality conflicts, drugs and the 1960s lifestyle. STEVE KATZ and Al Kooper then left to form BLOOD, SWEAT AND TEARS.
Katz studied guitar with Dave Van Ronk and Reverend Gary Davis. It was at this time that he met and befriended guitarist Stefan Grossman. They would sometimes act as road managers for Reverend Davis and, in so doing, met many of the great “rediscovered” blues men of an earlier era, such as Son House, Skip James and Mississippi John Hurt.

Kooper left Blood, Sweat & Tears after only six months. Getting their record company to continue with the band without Kooper was difficult. Auditions were held and David Clayton-Thomas was hired as lead singer. Their next album sold six million copies worldwide and fostered three number one singles. Katz continued with Blood, Sweat & Tears for five years, during which time the group won three Grammy Awards.

Not only were they pioneers in electrifying all dimensions of the Blues guitar, these artists still have their chops to this day. From Folk to Blues to Jazz, Danny Kalb and Steve Katz are as influential to the new generation of artists as they were to their peers in the 1960s.

You don't want to miss this triumphant return of DANNY KALB and STEVE KATZ to the original GASLIGHT CAFÉ!

Reserve your spot and come witness history as FRIENDS OF MIKE PORCO continue to parade through 116 MacDougal St.

Advance tickets can be found HERE

About the FRIENDS OF MIKE PORCO series at 116:

Mike Porco was the owner and operator of "New York's Center of Folk Music," Gerde's Folk City from 1960-1980

Everyone from Phil Ochs and Bob Dylan in the early 60s to Suzanne Vega and Lucinda Williams in the late 70s got their start at Folk City.

His grandson hosts shows at the world famous Gaslight Café with the very same artists who sparked and defined the 1960's Folk and Blues Revival in Greenwich Village.
Posted by Porco at 10:40 PM