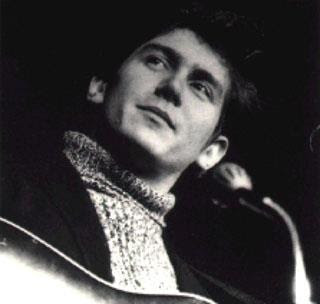 50 YEARS AGO this week, PHIL OCHS plays his first paying gig in New York's Greenwich Village for my grandfather, Mike Porco. Mike and Phil would have a special friendship throughout the rest of Phil's years. Musicians would report back to Mike that Phil boasted about his first gig at Gerde's Folk City as part of his stage banter. He was paid $90 for 5 days of work and within a week of his first booking, he was signed to begin recording for Elektra. Fellow Gerde's first-timer, John Hammond Jr told me that they were both signed to record contracts as a direct result of their Folk City gigs. Hammond signed with Vanguard Records.

In the 1970s, when many club owners in the Village banned Phil because of his erratic behavior, Mike Porco continued to treat him like family. Phil and Mike shared a drink at Gerde's 2 days before his untimely death.

My father, Bob Sr, was at Folk City for one of Phil's last appearances. An angry patron was unimpressed with Phil's stage presence and demanded his money back from Mike Porco saying, "I came to see Phil Ochs!" My grandfather retorted with, "You wanna see-a Phil Ochs? Look on the stage. He's right there." No refund given, you can bet.

In an interview given to radio personality Dan Behrman in 1979, Mike's emotional voice is heard saying, "I wish Phil lived 150 years."
Posted by Porco at 10:37 PM