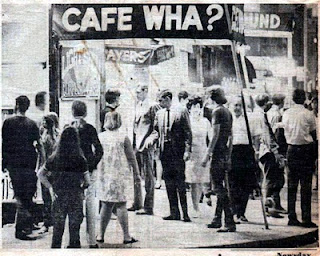 When the man named Zimmerman crossed the George Washington Bridge and rolled his way down to Green-witch Village to warm his bones and show his wares. The story has been told a thousand ways, so I won't chatter on too much. After spending early January playing coffeehouses in Chicago, he ventured to the University of Wisconsin and spent time with future Village pioneers Danny Kalb, Eric Weissberg and Marshall Brickman. Then he grabbed a ride to NYC in a 57 Impala with Dave Berger. First stop: The Wha? where he took the stage for a couple of songs with Fred Underhill. Owner Manny Roth asked the audience for a volunteer to put Little Zimmy up for the night.

The Cafe Wha? will be staging celebration of the occasion this Saturday January 29 to help celebrate the anniversary of his arrival. HIGHWAY 61 REVISITED, the official Dylan tribute band, will perform to an excited bunch.

Be there or be rectangular!

Zimmy was bent on playing at the feet of his idol Woody Guthrie (which he did) but first he had to get his feet wet and perform around the Village (which he did).

There were a lot of baskethouses to hone his skill in.....And there was a little Italian restaurant on 4th and Mercer that was a paying room. It had been booking all the up-and-comers as well as some blues greats still making their way on the road. It also held an open mic on Mondays. Bobby wasn't the first nor the last fingerpicker to make a point to hoof over to Gerdes and take a number from the hat.

Dylan's first Hootenanny would have to wait a few days, but he seemed to like them considering he frequented and played them for months after. Folk City later would be known as "Dylan's turf." The legend of how Bobby became Dylan lured singer/songwriters from around the country to try their hand at it, too.