Phil Ochs: There But For Fortune 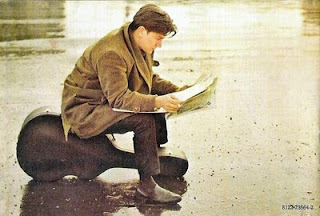 What a splendid piece.
The movie. And Phil.

The buzz for the movie's arrival started some weeks back. Phil's sister Sonny had mentioned it to me in the spring but it had completely slipped my mind until recently when it started to get mention on Facebook. The first thoughts that came to mind when I saw the ads and promos were the words of my grandfather himself saying "I wish-a Phil Ochs lived a hundred years." He said this in 1979 during an interview with Dan Behrman. Dan was generous enough to make me a copy and it remains the only lengthy recording I have of Grandpa's voice.

The interview was taped in the basement office at 130 W. 3rd and aired on Dan's show on WBAI and in it, one can hear exactly what Mike Porco was like. His speech was even paced and comforting. He had a firm mastery of English even if he might twist a pronunciation or two around. He had a kind laugh and was soft spoken. In fact, the recording caught Mike answering the phone a couple of times to give directions and to take a message for an employee who had not yet arrived at the club. He wasn't pressing for time nor did he seem pressed himself. He was taking his time before work. The night was likely to be long.

Dan was talking about some of the musicians that had played on Gerdes' stage and Phil Ochs was mentioned. Phil Ochs graduated from passing the hat at baskethouses to working paying rooms in Greenwich Vilage.  "Phil was a very shy type, when I met him," Mike said. "I think he was-a one of the best songwriters around. Where ever he would play, he used to mention 'Folk City' and my name and say 'that was the first paying job I had.'"

It's been said that Mike treated most of the Fellas like his own son, but everybody knew that Phil was "his boy". Sonny told me that. Jack Hardy told me that. Rod MacDonald told me that. And I'm sure to hear it again.


In an unguarded moment, Mike's voice softened even further as he seemed to lose his place. "Ive been thinking the world of him and I really miss him today. I wish he lived to 150. I love him."

It was a gripping tale of a man every generation should know about. As it was put in the movie, "he had a voice, six strings and conviction." Phil was able to create a career for himself out of nothing if not a passion to express himself through music. While Dylan and many others were writing from personal experience, he was interpreting world events into a language that could be understood on the gritty streets of New York. Like a conduit between the New York Times and the masses, he found a way to mobilize people against the unholy and unjust acts committed at home and abroad. He brought unspoken and heady issues to the forefront like the CIA overthrow of the democratically elected leader of Chille, Allende. He helped form the Young Independent Party (Yippies) with Abbie Hoffman. He tirelessly battled the ridiculousness of Vietnam. And he did it through music. With beautiful melodies and a sweet voice.

No one I've spoken to so far speak ill of Phil Ochs. And when his name has come up, the tone of the conversation changes. His contemporaries and peers loved and miss him. And I'm proud to know that Grandpa cared for him when others shunned him.

The movie is a lesson in creativity and rising up in a crazy and crazed world.

Showtimes:
http://firstrunfeatures.com/philochs_playdates.html
Posted by Porco at 12:56 AM

Email ThisBlogThis!Share to TwitterShare to FacebookShare to Pinterest
Labels: Gerdes Folk City, Mike Porco, Phil Ochs, There But For Fortune