Mike Porco takes Bob Dylan to get his cabaret card on April 10, 1961. Later that night, Dylan meets Joan Baez at Gerde's. The next night, Bob starts working professionally. What a difference a day makes. 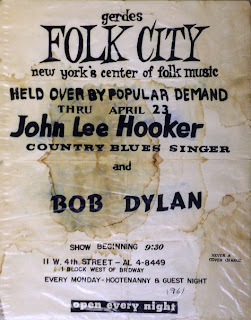 Who knows how many other young men arrived in New York City in the winter of 1961 looking like James Dean and talking like Jack Kerouac? It would have been difficult to pick Bob Dylan out of the crowd at first, considering how much he had in common with the other Bohemian kids kicking around Greenwich Village. Artistic ambition? Check. Antipathy toward mainstream culture? Yes. A desire to put his middle-class identity behind him? Definitely. But the singular creative vision that would separate Dylan from the rest of his peers and change the face of popular music wasn't really in evidence yet. What Bob Dylan did have, though, in addition to his guitar and harmonica, was a unique stage presence and a vast library of American folk songs in his repertoire. On April 11, 1961, he got his first real chance to put those on display with his first major gig in New York City, opening for bluesman John Lee Hooker at Gerde's Folk City. 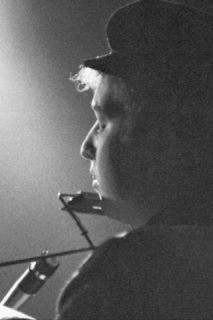 Bob Dylan had just arrived in town a few months earlier, but as the prominent producer/talent scout John Hammond would write in the liner notes of his debut album one year later, "The young man from the provinces began to make friends very quickly inNew York, all the while continuing, as he has since he was ten, to assimilate musical ideas from everyone he met, every record he heard." Dylan befriended not only his idol Woody Guthrie—whose hospitalization in New Jersey had been the initial impetus for Dylan to come east from Minnesota—but also some of the significant figures on the burgeoning Downtown folk scene, like Jack Elliot and Dave Van Ronk. Dylan would write about this period in "Talkin' New York" (1962), which included a verse about his breakthrough gig at Gerde's:
After weeks and weeks of hanging around
I finally got a job in New York town
In a bigger place, bigger money too
Even joined the Union and paid my dues. 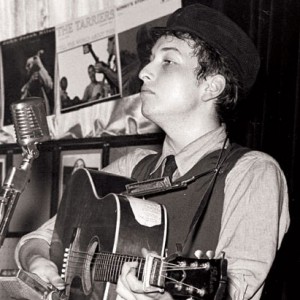 Gerde's was probably the most important folk-music venue in New York City at the time—the club that every folk act with a national profile played when they were in town. Dylan had previously joined other unknowns like himself onstage at Gerde's during the club's Monday "Hootenanny Night," but the invitation to appear on a regular bill presented a bit of an administrative problem. At just 19 years old, Bob Dylan was too young to obtain the necessary union card and cabaret license. One of the clubs owners, Mike Porco, was interested enough in getting the young man on the bill, though, that he signed on as Dylan's guardian—"the Sicilian father I never knew I had," as Dylan put it.
A number of major developments in the year that followed would set Bob Dylan on his road toward stardom, but the very first of those was his appearance at Gerde's Folk City on this day in 1961. 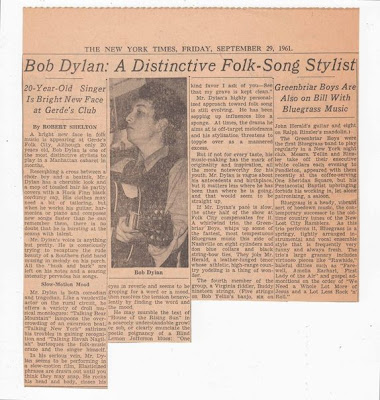 http://www.history.com/this-day-in-history/bob-dylan-plays-his-first-major-gig-in-new-york-city
Posted by Porco at 9:42 AM